With the best of the best in big air battling it out for the World titles in three different disciplines — twin-tip, strapless and hydrofoil — at the same event (a world first in kiteboarding competition), the Qatar Airways GKA Big Air World Championships in Tarifa was definitely one for the history books!

After several lay days due to a lack of wind, finally, the notorious Levante wind started pumping in Balneario, the main event site for the remaining disciplines just outside the old town of Tarifa. The format was seven-minute heats with three tricks counting out of ten. 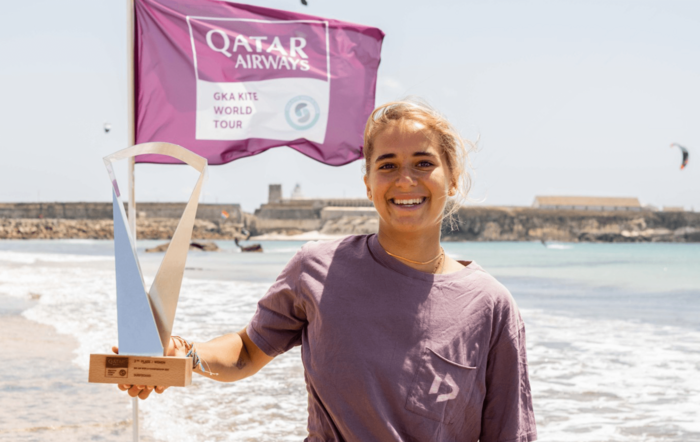 The Women’s Strapless Big Air riders were the first to take to the water, getting the crowd on the beach excited with some spectacular moves. Fascinating to witness was the progression in the women’s strapless, with all of the girls pulling technical kite loop manoeuvres and sending it big. In the finals, a huge kite loop right on the buzzer catapulted Capucine Delannoy (FRA) into first spot, securing her the Qatar Airways GKA Big Air Strapless World Champion title ahead of Tarifian local Camille Losserand (CH) and Brazilian multi-talent Mikaili Sol

With the Levante continuing to build, and more than enough time in the day still, the judges called on the Men’s Twin-Tip Big Air.

The semi-finals saw a face-off between BAKL Cape Town winner Lorenzo Casati (ITA) and local legend Liam Whaley (ESP), who grew up here, knowing Balneario and the prevailing conditions like the back of his hand. The Italian stallion Lorenzo gave everything, yet, it wasn’t enough to defeat the Tarifian hero Liam, who advanced straight into the final. The second semi-final was an epic display of power and skills, with BAKL Tarifa Full Power winner Giel Vlugt (NED) up against the one and only Andrea Principi (ITA). Neck and neck throughout the heat and pulling off massive double and board-off loops, Andrea Principi succeeded in making it through to the final. History was written in the decisive last heat in this discipline between Andrea Principi (ITA) and Liam Whaley (ESP). With both riders sending it like no tomorrow, the crowd went ballistic when Andrea Principi (ITA) decided to do a quick kite change in the last few minutes before the buzzer sounded. 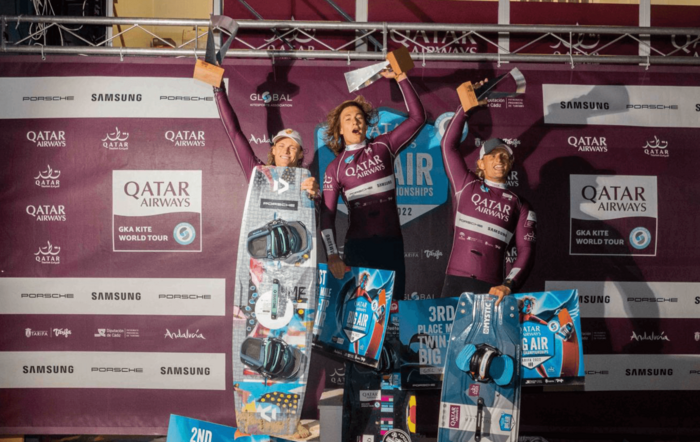 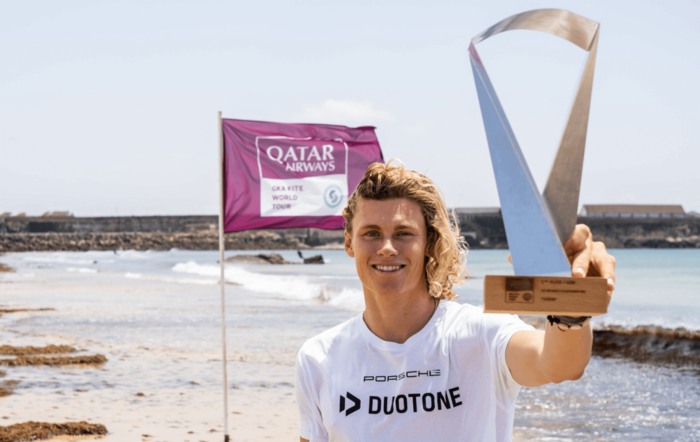 Back on the water with a new kite and not much time left, Andrea went straight into pulling off the most monumental move of the competition so far: an XXL version of his signature boogie double loop. Not even Andrea thought he would make it: “This was the most extreme move of the day for me. I saw my kite below me and thought for sure my kite was not going to catch me. Somehow I made it out alive”. Miraculously riding out of this insane move scored Andrea a whopping 10 points (the highest scoring trick of the day) and thus both the victory and the Qatar Airways GKA Big Air Twin-Tip World Title. Huge Congrats also to runner-up Liam Whaley (ESP), Giel Vlugt (NED) in third and Lorenzo Casati (ITA) in fourth.

The final day of this epic competition raised the bar of competitive kiting to yet another level.

In the Women’s Twin Tip Big Air Competition the female shredders pushed women’s big air riding to the next level. One manoeuvre that left everyone speechless happened in round 2 when Natalie Lambrecht (SWE) landed a clean, powerful double bankroll megaloop. Later in the semi-finals, the Brazilian superwoman Mikaili Sol wrote history by solidly sticking the first-ever doobie loop in competition. Advancing through to the final, Mika faced the BAKL Tarifa Full Power Champion Zara Hoogenraad (NED). Right from the buzzer, both girls were on fire. Zara answered back to a double front roll board-off by Mika, with a textbook boogie loop. Yet, rider of the year Mikaili Sol (BRA) went full throttle and more, sticking another doobie loop and taking out the victory ahead of Zara Hoogenraad (NED) and Nathalie Lambrecht (SWE). There are no words that can adequately describe Mika’s out-of-this-world talent. Only starting to train for big air, a discipline that she usually isn’t competing in, a few days before the competition, Mika pulled off moves that others are training for several months. Ultimately winning the big air discipline, just confirmed yet again: Mika is undoubtedly the most diverse female kiteboarder of all time 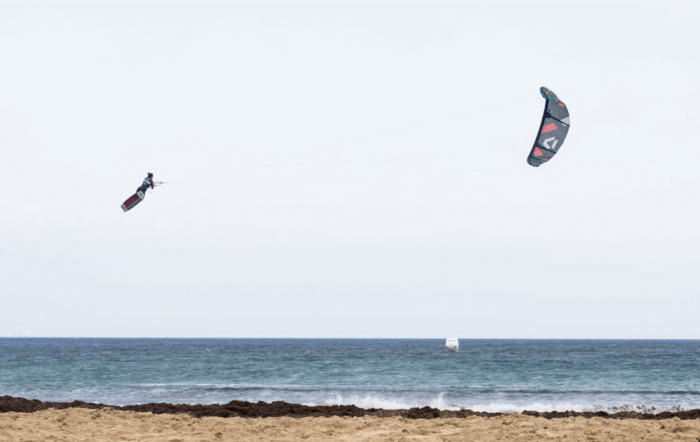 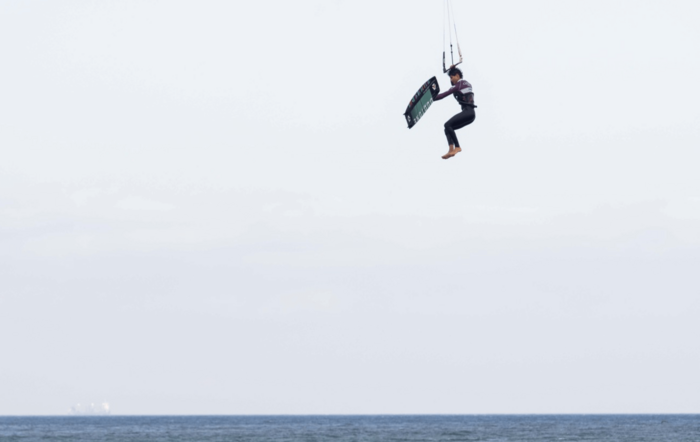 What an amazing show, girls — congrats and thanks for shredding so hard!

Regardless of the winds having dropped a little in the afternoon, the Men’s Strapless Big Air kicked off. It was the icing on the cake of a kiteboarding event the likes of which hasn’t been seen before. 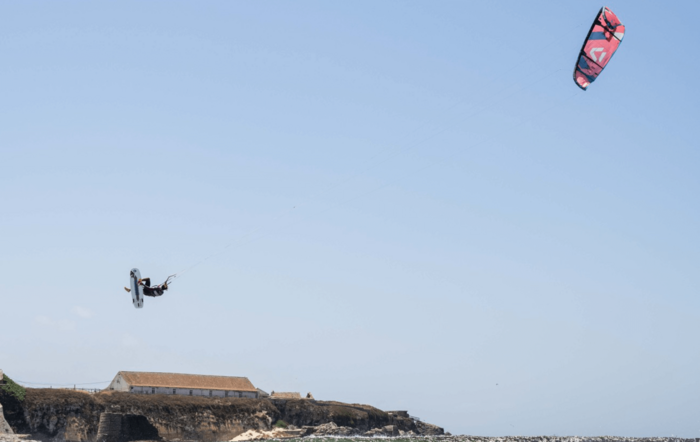 As a newcomer to the GKA, Gabriel Benton (BRA) took out the highest score of the day with 25 points in the semi-finals. Pulling off some sick manoeuvres such as a crontaloop as well as a front and backroll megaloop secured him a spot in the final in his first GKA event ever! His opponent in the final: the king of strapless Airton Cozzolino (ITA)who had consistently stomped out spectacular massive moves all day that had the crowd on the beach flipping out. Airton made it pretty clear all throughout the competition that his mind was firmly set on the World Title.

Taking to the sky, sending and landing a humongous textbook megaloop, and sticking every single trick, Airton was unstoppable. Claiming yet another Strapless Big Air World Championship Title, Airton was super stoked during the awards ceremony, and although Gabriel Benton (BRA) struggled to land all his tricks in the final, he couldn’t have been happier with coming second behind the legend himself. Congrats also to Lorenzo Casati (ITA) for third and Camille Dellanoy (FRA) for fourth place. 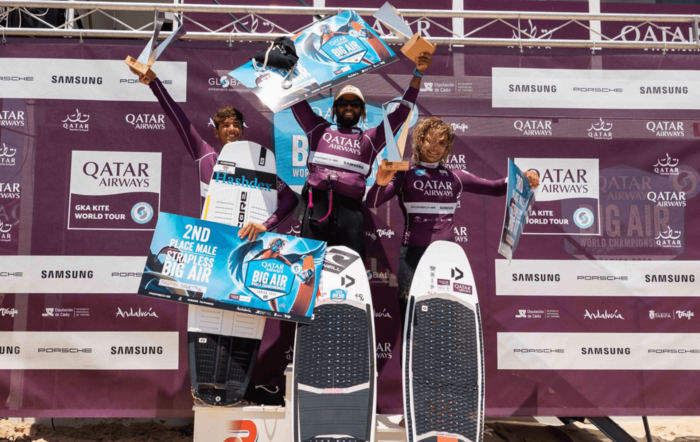 We bow to Airton and the rest of the field!

A truly epic event has come to a close. We at Duotone are super proud of our team and the three new World Titles, the two Vice World Titles and three 3rd places in our brand’s name.

Here’s to the next event ahead and more crazy action, we simply cannot wait!