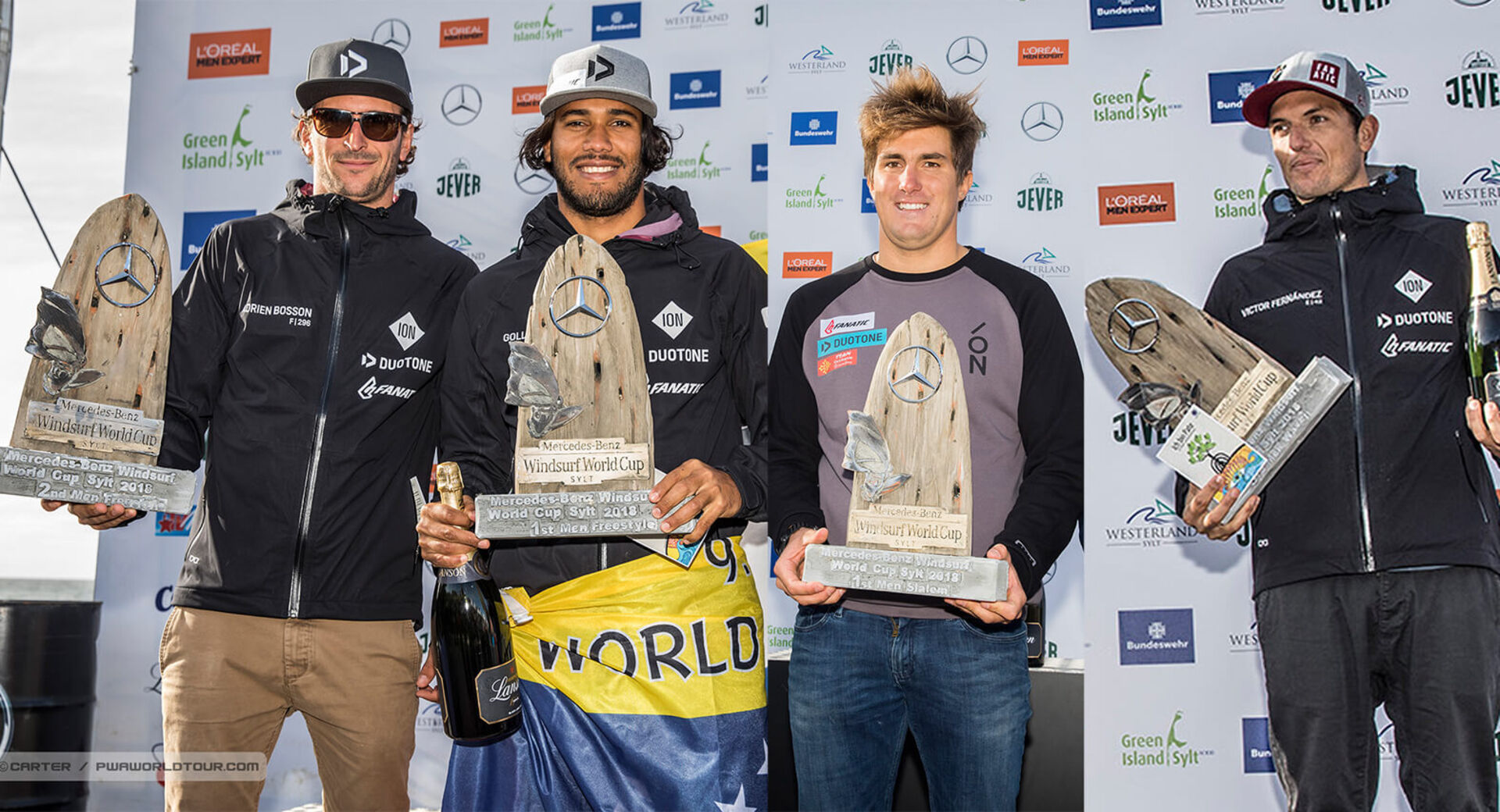 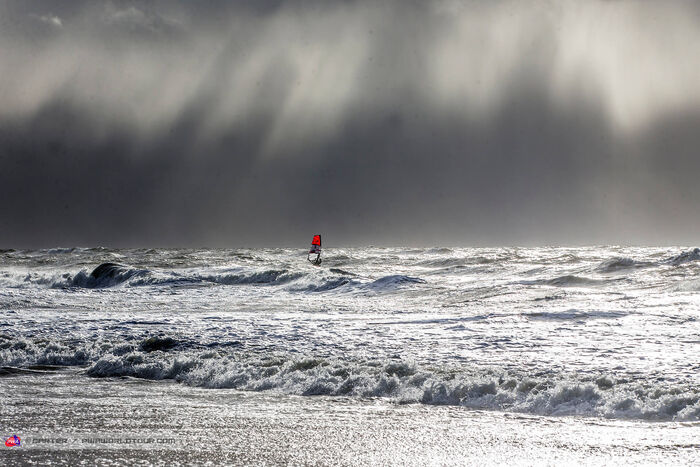 The MERCEDES-BENZ SYLT PWA World Cup 2018 was the last event stop of the PWA tour 2018 and delivered excellent conditions for a thrilling show-down. Around 200.000 spectators saw our Duotone teamriders dominating in nearly every discipline.

SLALOM
An action packed start to the 2018 Mercedes-Benz Sylt PWA Super Grand Slam continued on Day 2 with a full day of racing, which saw two races in challenging conditions with a mixture of chop and swell testing the world’s best racers. During the slalom most sailors were on 7.8-8.6m and their medium boards to cope with the tricky water conditions.

Pierre Mortefon was claiming a bullet and a 4th place in tough slalom conditions. Since no more slalom races could be completed he finished his season with this great event win, which will give him a lot of confidence for 2019 to fight for the overall Slalom crown.

FREESTYLE
Adrien Bosson was the standout sailor in the single elimination as the Frenchman levelled up the Freestyle World title race by claiming his first victory in a Single Elimination with a hugely impressive and explosive display of sailing.

The 27-year-old posted a heat score of 155.4 points in 3 consecutive heats as he showed not just an explosive array of moves, but also the level of consistency that is required to go all the way. Bosson’s victory was made all the more impressive as he defeated two-time vice-world champion - Amado Vrieswijk

Having finished 2nd in the Single Elimination, Gollito would need to beat Bosson twice to be crowned Freestyle World Champion and given the way Bosson performed yesterday that was not going to be easy. However, in the Final looked underpowered on 4.4m and while he still sailed exceptionally well again he suffered a narrow 116 points to 117.3 points defeat as the title race was forced into a Super Final.

At this point, a victory for Bosson would force a sail off for the world title, while a victory for Gollito would secure a 9th world crown.

For the sail off Bosson changed up to his Idol Ltd 4.8m which gave him more power and for a long time he was going blow-for-blow with Gollito, but the 8-time Freestyle World Champion has an uncanny knack of raising his game when it matters most and that’s exactly what the Venezuelan did again as he posted the highest scoring heat of the day - 130 points - to complete a superb comeback and win an incredible 9th world title, while only further enhancing his reputation as not only the King of Freestyle, but also the competition machine.

Meanwhile, Bosson walks away from this season as the vice-world champion, which is the Frenchman’s best result of his career so far, and he should be hugely proud of what he has achieved this year.

Victor Fernandez had to endure an emotional rollercoaster today as he chased a 3rd Wave World Title. Things started brightly for Fernandez as the Spaniard sailed tactically astute heats to successfully defeat - Leon Jamaer, Antony Ruenes, Jaeger Stone and Alex Mussolini - as the 34-year-old progressed into the top 3, while moving to within one victory of guaranteeing himself the world title.

Meanwhile, Ricardo Campello could do nothing but sit and watch as Fernandez threatened to derail Campello’s own hopes of capturing a first wave world title as he stormed back through the double.

During the night, winds of up to 60 knots whipped the North Sea into a cauldron to leave the wave fleet facing Storm chase-esque conditions at first light this morning.

Having won 5 consecutive heats in the Double Elimination, now there was only one man standing between Fernandez and a 3rd world title. The man in question? A certain Thomas Traversa, who eliminated Fernandez in the quarterfinals of the Single Elimination and put Fernandez’s title hopes in jeopardy in the first place.

The heat itself wasn’t so dramatic, but with almost nothing between them, this is where the confusion set in as incorrect information quickly filtered to Fernandez, who thought he had just won his third world title. However, at this point, the result hadn’t been fully verified or officially confirmed, which led to Fernandez having to be delivered the horrific news that Traversa had in actual fact won the heat by just 0.07 of a point and that he wasn’t world champion at all.

The Villain and the Hero

Having just played the villain by putting a spanner in the works of Fernandez’s world title aspirations, Fernandez was placed in a strange position, not only having to deal with the heartbreak of not being world champion - yet at least - but also now having to root for Traversa, who had just eliminated him, as all his hopes now rested in TT’s hands.

However, in order for that to happen, Traversa would have to defeat Campello not once, but twice, which is no easy feat on any given day - but even more so with Campello himself gunning for the title. That left Fernandez with an agonising wait, which must have felt like a lifetime.

Fortunately for Fernandez, and not so fortunately for Campello, Traversa produced the goods at the critical times to win both the Final and the Super Final, and with it, Fernandez’s emotional rollercoaster was complete as he was now officially the 2018 Men’s PWA Wave World Champion.

HUGE CONGRATULATIONS TO OUR DUOTONE RIDERS FOR THIS LEGENDARY PERFORMANCE!