We sat down with STEFAN SPIESSBERGER on location in Union Island during the SLICK product shoot to get his impressions of the new wing. 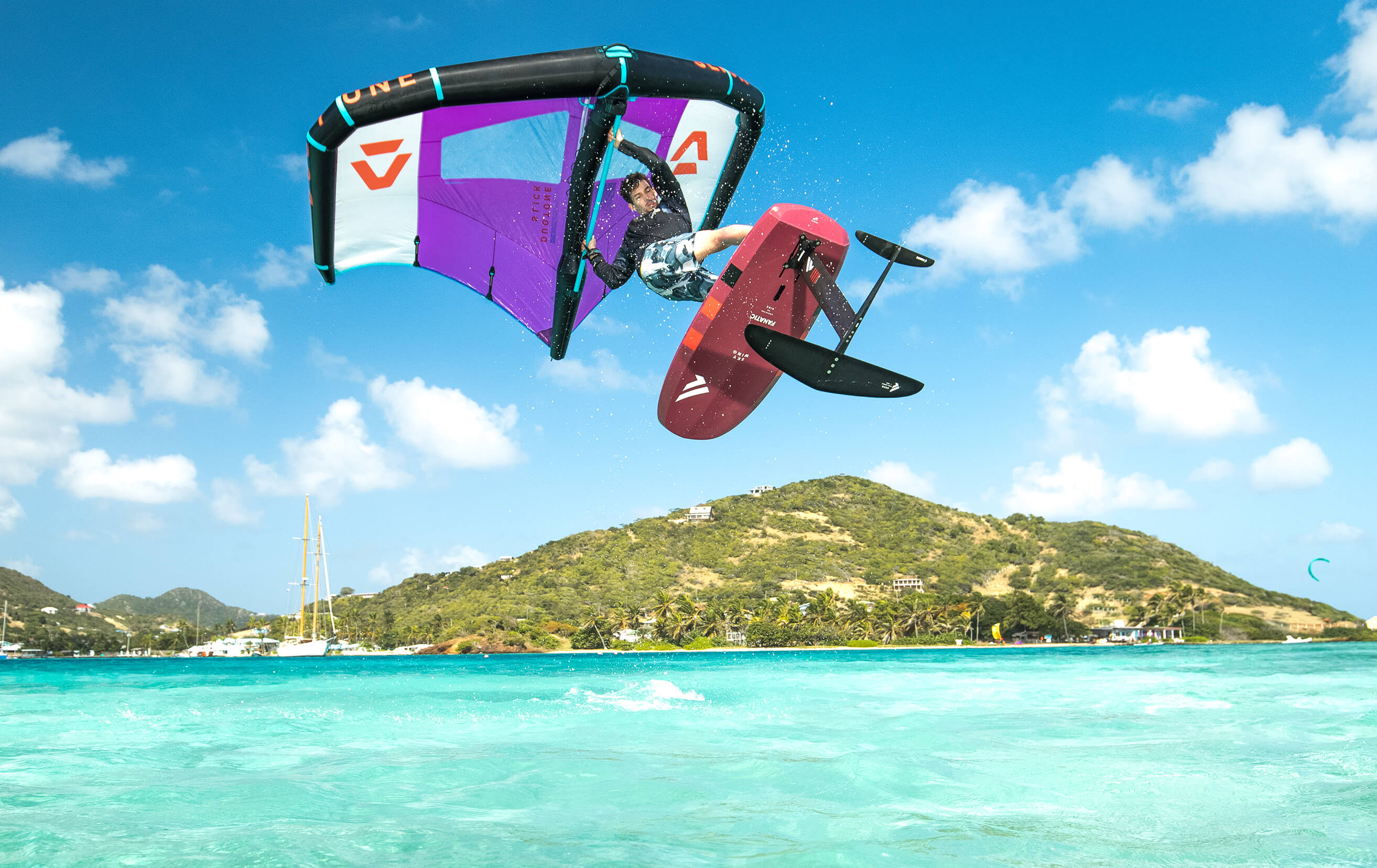 Hi Stefan and welcome, so tell us, when did your journey with foil winging begin?
I actually started at the beginning of the summer season in 2020, I was home a lot (due to the pandemic) We have quite light winds in the summer months so when I got my gear I got hooked straight away! I spent quite a bit of time on the water from then on. 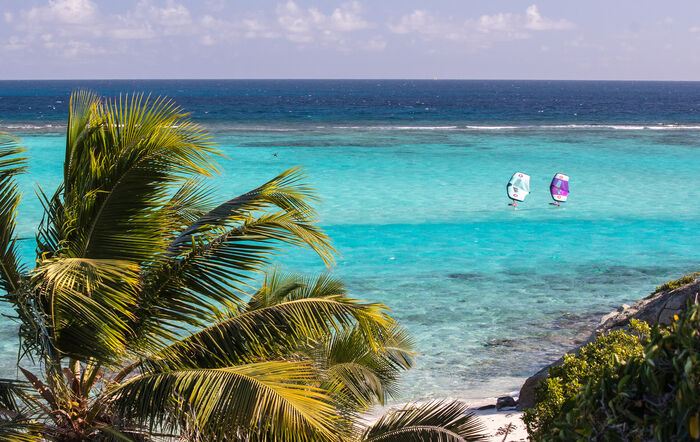 You’re a professional kiteboarder on the Duotone International team, what was the appeal of foiling winging for you?
In the beginning, it was the appeal that I could get out on the water in 10 knots. With kiteboarding, I’m not able to do proper freestyle in 10 knots so winging for me was a good alternative. As I progressed with my wing level I found I wanted to ride in stronger winds as well and now I split my time between kiting and wing foiling. It’s a good balance, it gives me renewed motivation to kite again, motivated to wing, it's great to switch it up! With the wing foil in the beginning you learn so much in such a short time and I think learning something new is always fun and that’s why I got so addicted to it!

What kind of tricks have you been doing and what moves are you working on?
In the beginning, you first learn straight jumps then you move onto 180s and frontside 360s, and if you look online right now there is new tricks popping up every week right now. It’s just starting and developing now and getting crazier and crazier, there is always something new to learn.
I’m trying to do some handle passes now and bring some style in from my kiteboarding.

You can definitely see you are bringing some of the Stefan Spiessberger style over from your kiteboarding.
Yeah, It’s not easy to find a lot of jumps that you can grab properly with winging so it’s taken a bit of time to figure out which trick works with which grab. As soon as you let one hand go off the wing it's quite different to letting one hand go on a kite bar. The is quite a different approach coming into it but it’s been fun to figure out what looks good and what works. 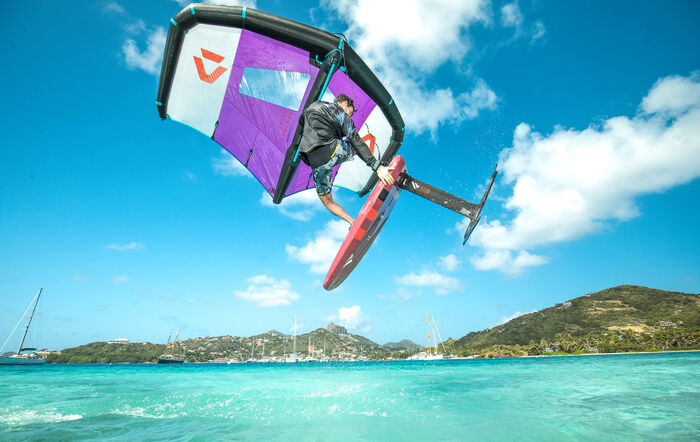 You did an incredible trip this last summer hiking up a mountain with your wing foil gear in Austria, tell us a little bit about that trip.
Yeah, that was quite fun, not something you would do every weekend! I was at home in Austria and we couldn’t really travel anywhere so I planned a little trip together with Max Mattisak, he’s a pro windsurfer from Austria. We were trying to find the highest located lake in the Austrian alps that we could possibly wing foil if there was a chance of wind. We found two lakes that were similar altitude. We hiked up to the first one which was a two-hour hike with all the gear on our back, which was pretty gnarly and quite exhausting.

We arrived at the lake and there was zero wind, to that whole first mission was basically for nothing, we weren’t able to get any action shots. A few days later we hiked to the second lake and there was a forecast for 20 knots, but as there were so many high mountains surrounding the area it was difficult for the wind to get into the area. In the end, we managed to get the shots we needed, we didn’t have much wind, maybe about 10 knots the whole day maximum. For myself, that was the early days of my winging so getting going in 8 knots at times was quite hard to get going! But we managed to get some good footage and it was a fun trip!

Tell us about the set up you’ve been using?
In the beginning, I rode a bigger board, but that was also because I hadn’t received my set up yet, I was borrowing gear from everyone! Now I have my ideal set up and I’m using the 5’0” Sky Wing board with the Echo wing and now switching over to the Slick wing. It’s quite exciting going onto the Slick, it’s quite a step forward. The Slick freestyle wise is what you want to have, the boom to me makes a lot of sense, I like to switch hands quite a lot and the boom also makes it super easy to do jumps! It’s been really sick to ride the new wing, I can’t wait to get a whole season on them!

The Slick is the new model just out, you had some time on this trip to ride it, what would you say are the key differences?
From the first moment I had the slick in my hands I straight away felt especially in the larger sizes, the wing is more agile, reactive and way quicker. This results in faster flying speeds, I can speed up way more than I used to be able too, which helps a lot with getting more airtime and getting planning sooner. I’m loving the MiniBoom as well, especially for freestyle, the boom helps me a lot, when switching hands quickly I’m never missing the grip. I think we’re going to have a lot of fun riding the Slick over the coming season.

You’ve currently only ridden the aluminium MiniBoom but this set up is already substantially lighter than your previous Echo, how do the Strut and weight reduction translate when it comes to stability and ease of use on the water?
It has become much more stable, the Slick is also a wing you can ride comfortably in the waves now which is pretty cool as this one wing works perfectly in all conditions. With the Carbon MiniBoom coming out it will be quite an upgrade, it will be cool to have a high-performance boom. Combining this all with the Fanatic Carbon Mast and Fuselages coming out, it’s going to be quite the setup!

Let’s talk a little bit about the foils, you mentioned you ride a 5’0” sky wing, but what is your mast wing and fuselage set up?
Most of the time I’m foiling on lakes in Austria so my front wings are usually quite big. Most of the time I ride the 1500 high aspect, with this you can ride in any kind of wind from 9 knots to 25 knots. I’ve been really loving that. Mast size I always ride the 750 which is quite a standard mast length. That's my go-to set up. If it gets lighter I sometimes ride the 1750 from Fanatic, high aspect as well. It’s pretty cool with foiling that you can really adapt your gear to the conditions you have, it allows you to spend a lot of time on the water, and this is what we all want to have, that’s the good thing about winging! 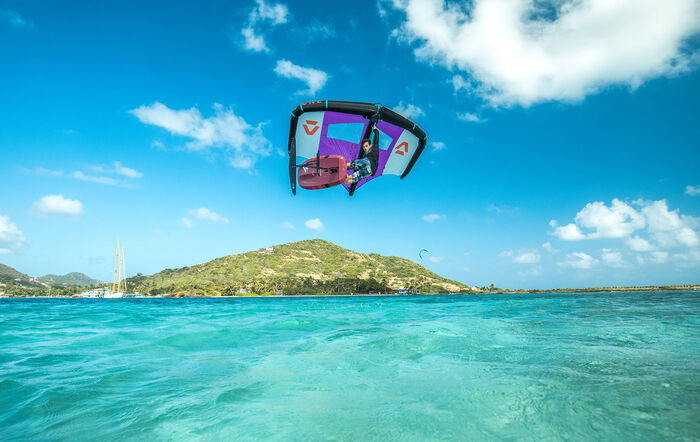