WHY IS VICTOR FERNANDEZ THE BEST WAVE SAILOR OF OUR TIME?

What happens if you throw 15 years of PWA emotions, fights, Laughs and tears into a boring excel sheet? 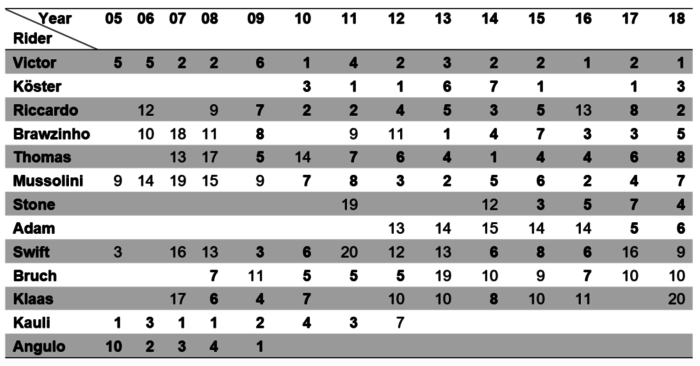 Our student trainee had too much time and came up with this akward chart.

It depicts all TOP-20-PWA-wave results of the 13 most succesful windsurfers since 2005. Indulge in the fascinating world of windsurfing statistics... Read below the most interesting facts we found about windsurfing generations. Let us know, if you see more correlations! 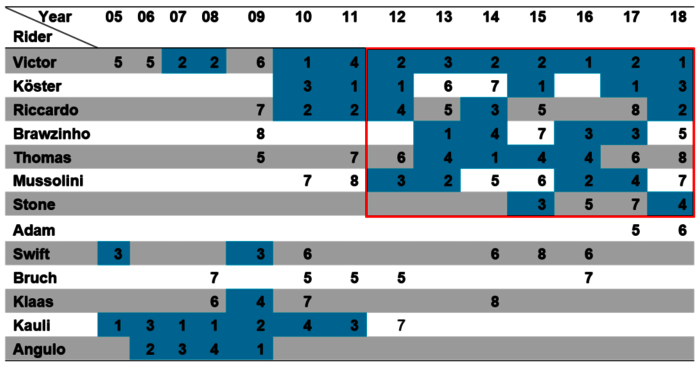 Who will be the champions of the next decade?

2004, when Victor broke into the TOP 6 for the first time, George W. Bush was reconfirmed president of the US, the Mistral One Design was no longer the Olympic windsurfing class and Köster was only 10 years old.

That was 15 years ago. Since that year, he has never left the TOP 6. 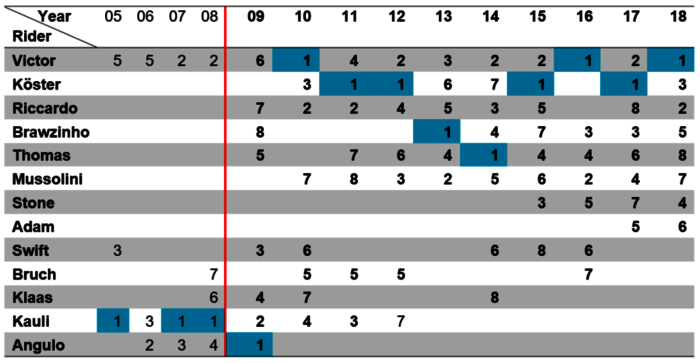 Who will be the first youngster to break into the TOP-8?

He always has been correct and well educated. Very kind with his friends, teachers and you really noticed that he is very polite. His mum never had a problem with him. Never.

He was a cheerful, lively little boy, very good, but a bit naughty. With a lot of energy, not even sitting down for eating. He climbed through the windows in kinder garden, played batman, did pranks… We didn't know where it came from - it was just him!

He had that awareness of what he wanted and how to achieve it, but he never lost his down-to-earth attitude. People on the tour tell me that he's a fantastic windsurfer, but an even better person. For a father there is nothing better.

ClIMBING ONTO THE WINDSURFING BOARD

We had a small board on the beach. One day - Victor was playing in the sand - suddenly he climbed onto the kit and sailed away. The little fellow just lifts the sail, grabs the boom and sails to the ocean, me swimming like crazy behind him – he was only 5! From there on this new world started.

He had a supernatural affection. You would see that tension in his eyes he was watching his father with! When people from outside came for races, Victor spend hours on the watchtower, observing these guys sailing. As if he could learn through pure osmosis!

Pepe offered him a job as windsurfing instructor and suddenly we were all windsurfers.

My dad took me everywhere. He understood that this is the only way. We would spend every weekend windsurfing. My very first sponsor was Mar Azul. There up to 14 events on national level between Portugal and Spain those days. For the competitions we had to sleep in the van in remote places, but doing that you learn a lot ... you don't need much in life, if you can do what you love. When I was 12 years old, I came to Gran Canaria for the first time. My dad promised me, if I´d approve the exams, I could go.

He bought a ticket and was gone. We could stay in contact, but no like today where you use facetime. All day in the water and then he told me he was only cooking pure rice!

If you want to be World Champion, you have to come to Pozo. Throughout the entire summer and even spring, we have strong and constant wind. Every day you can practice and repeat your manoeuvers and master to land new ones.

My parents always supported me. I gave 110%, started bringing home good results from competitions. In 2006 I won my first PWA event. The PWA is the maximum. You sail against your idol as well as against guys in your age, who struggle just like you. I remembered watching videos of Jason Polakow, Robby Naish, Björn Dunkerbeck in Maui.

After the Juniors, he started in the PWA. He wasn't well-known yet to the judges that time. True story: That year the reigning world champion couldn't believe that he won against Victor in the final, because Victor was obviously sailing better and still lost. Victor tried doubles and threw a sick show on the water, but hadn't been that famous yet.

There was an almost untouchable top 10. The newcomers had to sail double as good as them to break into that wall. I always describe him as "Anti-Hero". He is beyond the cliché of the radical surfer who is expected to go to the limit with everything he does. He is a good person and friend.

He has spent hours and hours in the water and sailed in various conditions. Victor works with a special windsurf coach, he follows a sportive diet, he goes to physiotherapy... He works mentally and physically to be able to give all his energy to wave sailing. I think this seriousness and discipline comes from himself. Sacrificing hours of any other activity to train and prepare on the water and on land. Windsurfing is a way of life.

The common image of a windsurfer is not necessarily one of an athlete. However, Victor is a hard working person and well organised. Technique and tactic training are highly connected to physical strength. I think Victors most important qualities are his seriousness and his engagement not only for sailing, but also for fitness training.

"The best of being in the water is to feel disconnected. I am only thinking about which wave I'll catch next and about the next jump.

The sea gives you something, other sports can't offer you. The water is unpredictable. Every day is different, you risk something, you are almost unlimited. That's what I love most.

Windsurfing means everything to me!" 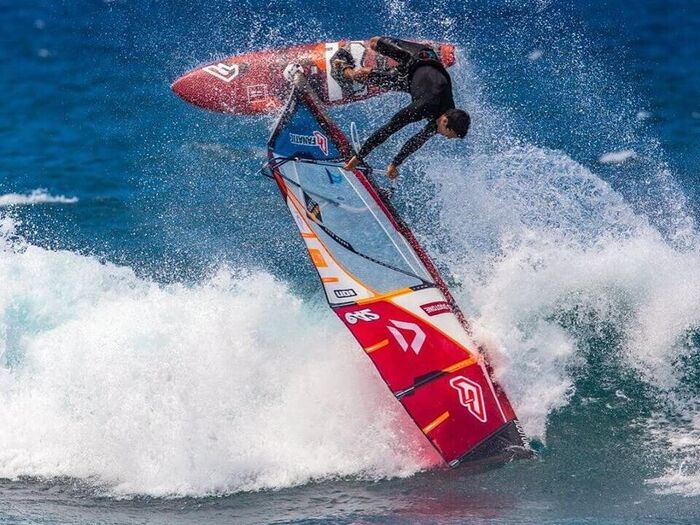 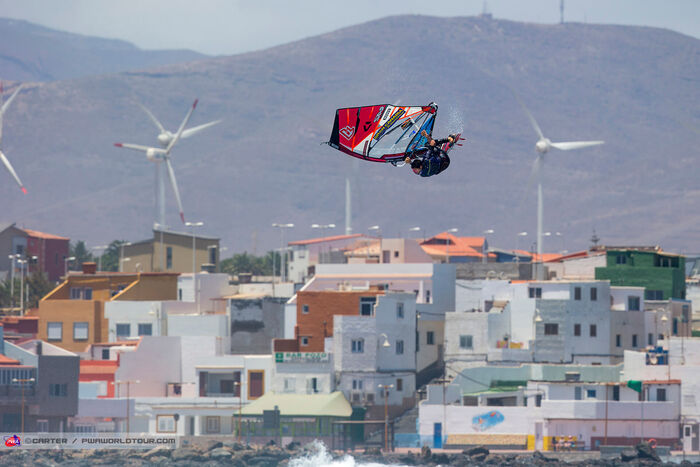