CONGRATS TO THE BEST TEAM

With over 18 months since the last event on the PWA World Tour, the windsurfing fans of the world waited with bated breath to answer one question… would it be fin or foil that came out on top?

Starting with the women’s side of the draw, they had two disciplines to compete in this week as the fin and foil stayed separate for an extra year. In the foiling, Marion Mortefon came flying out of the blocks, showing how much her dedication to training over the last 2 years has paid off and she took the first bullet of the event. This was the story for how it stayed as well as she managed to hold on to pole position for the entire week.

However, it wasn’t without a challenge as the young Norwegian, Helle Oppedal, took her first victory ever in a PWA race in round 2, only to follow it up in round 3 with another bullet! Consistency and experience, however, was in the end the winning recipe for Marion Mortefon, with 0.7 points separating the two Duotone riders at the end of the week! Outside of the top 2, UK Team Rider, Alice Read, proved to be one to watch in the latter half of the week as she took two 2nds, narrowly missing out on her first bullet in the final race, to elevate her up to 6th after a slow start to the week.

In the women’s fin slalom, it wasn’t quite such a simple story with gusty, shifty conditions blowing the competition wide open and the event lead changing constantly throughout the week. 2019 Vice-World Champion, Marion Mortefon, started where she left off with a 2nd place and by the end of the week didn’t count any results outside of the top 3, including a bullet in round 4. Going into the final race, only 0.3 points separated Marion and 4 times World Champion, Delphine Cousin-Questel in 3rd place – whoever placed in front would take the 2nd place. In a fight for the best start at the boat, the girls were pushing so hard they ended up both crossing the start too early resulting in disqualification from that round! Whilst it wasn’t the race we were expecting from the 2019 top 2, it was enough to award Marion 2nd place in the event and finish the week as the only girl with an incredible two podiums!

Outside of the top 3 it was a week to remember for another of the British riders – this time Sarah Jackson – who also took her first PWA race bullet and went on to post a career best result of 4th place. 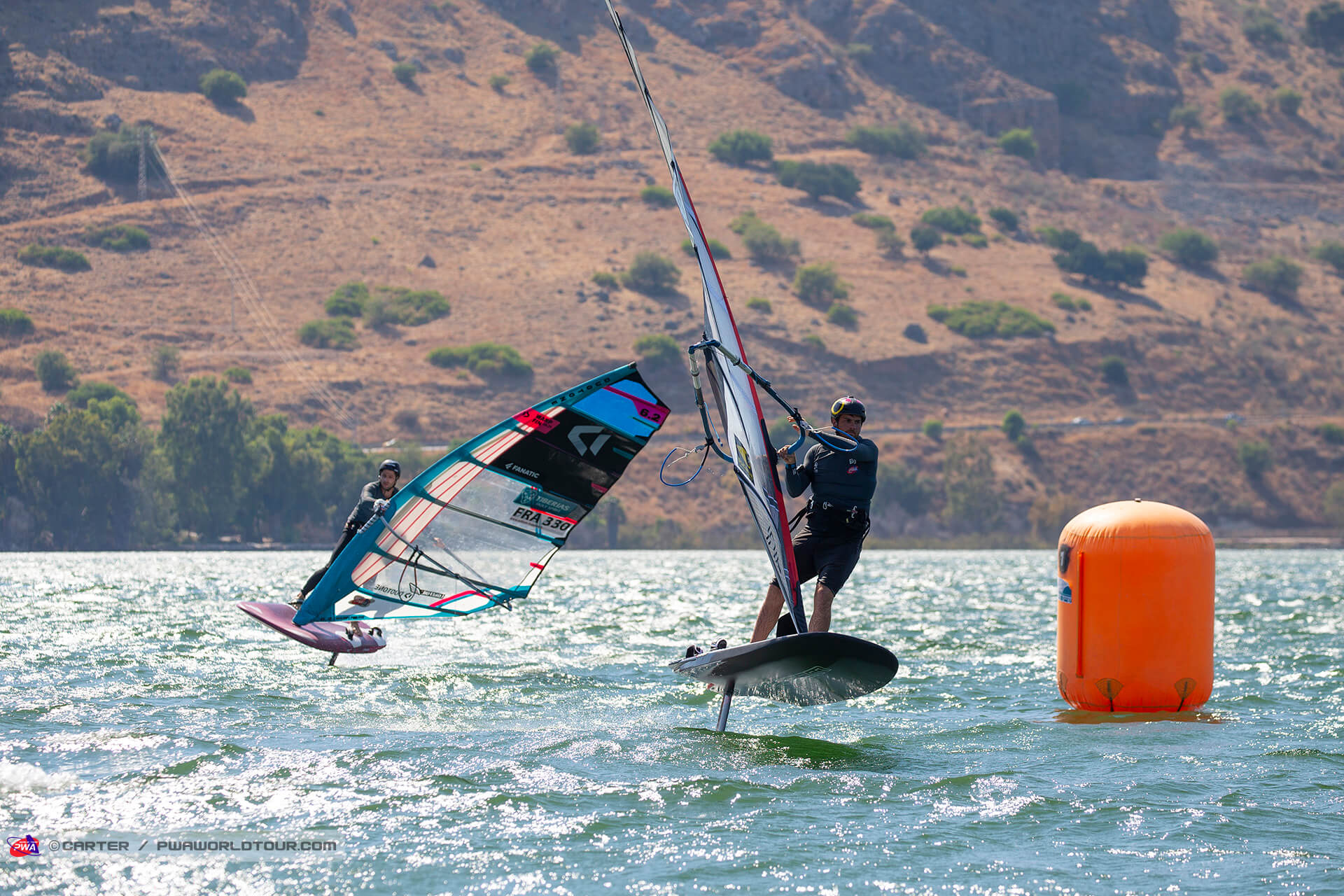 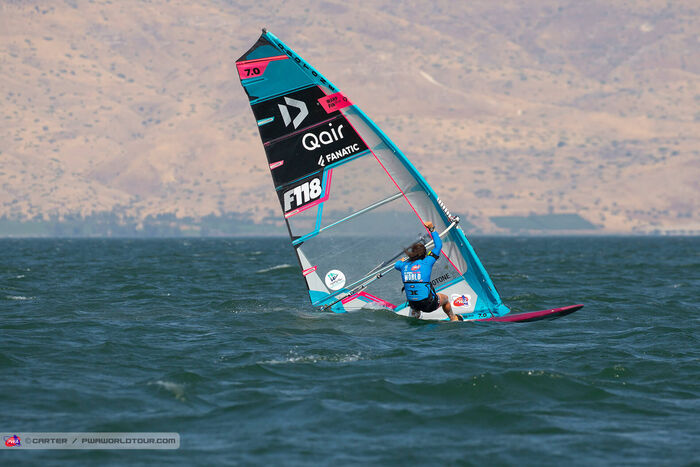 In the Men’s division, it was the first time that they would race with fins and foils in the same race, with the riders deciding what equipment they would take. The gusty and shifty conditions really opened up the event, with new names contending for the top spots alongside the 2019 Champions. At the midpoint in the event, the fight for the podium was still wide open, however there was a new name from Team Duotone making his mark in the top 3. The Flying Frenchman and Duotone’s foil expert, William Huppert, had an incredible week and showed a real dominance on the foil taking two race 2nds – his best results so far on tour. But unfortunately for William, 2019 World Champion Pierre Mortefon may have had an uncharacteristically slow start to the week whilst he found his standing against the foil, however Pierre wrapped up the week with 2 bullets, and the only rider to win an elimination on the fin, and knocked his French teammate off the 2nd place to finish the week Pierre Mortefon2nd and William Huppert 3rd.

For Jordy Vonk and Marco Lang, the high wind, gusty foiling was perhaps not what they were expecting from the week. Jordy started the week with a massive crash from a broken foil, but this didn’t deter him and after a series of winners’ finals, he finished the week in 10th position. For Marco, his incredible speed on the fin unfortunately wasn’t enough in the lighter, gusty conditions, however when the wind increased and racing switched to the fin, Marco excelled and managed to finish the week in 16th.

So what a week it was for #TeamDuotone – with so much excitement, action and drama, be sure to check out the video below to see the reactions from the team to a great first event back on the PWA World Tour!

CHECK OUT THE VIDEO BELOW! 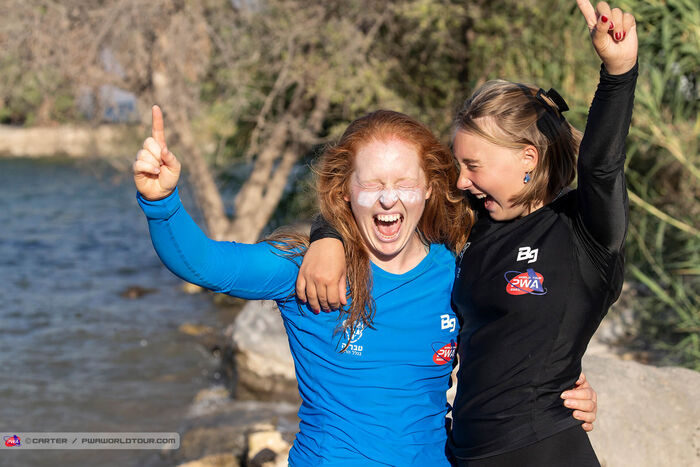 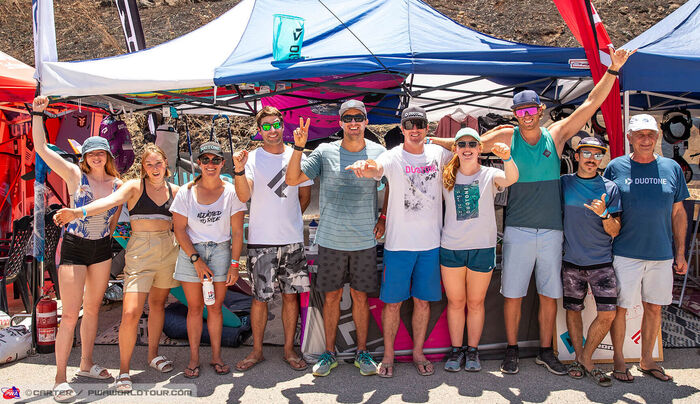 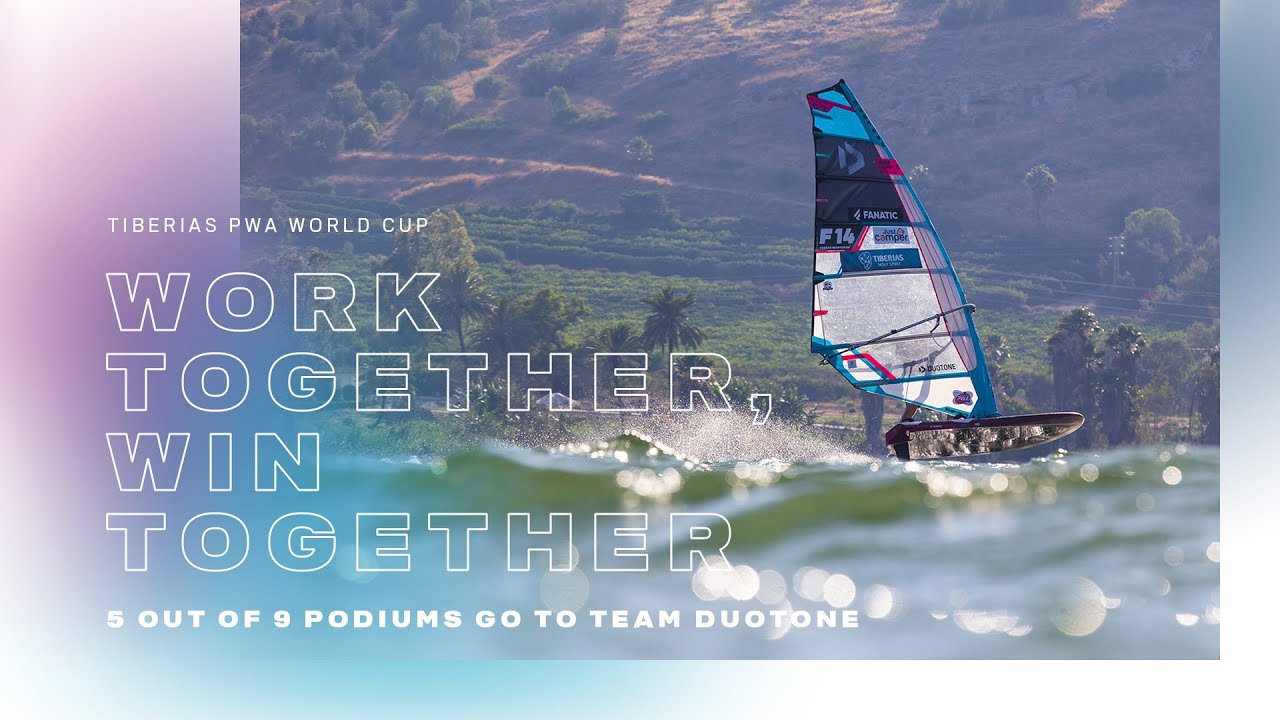