WE HAVE A NEW WORLD CHAMPION ON OUR TEAM: ADRIEN BOSSON!

AFTER winning two vice-world titles, this year it was a winner takes all showdown in sylt and a dominant display in the single elimination, gave adrien bosson the advantage heading into the double elimination super-final showdown...

He wasn't the only success for #teamduotone in sylt however as marc parÉ showed why he's one of the most promising names of the future, coming 2nd in the men's wave division, Whilst victor fernÁndez took 4th to secure a 3rd place finish for the 2022 season. 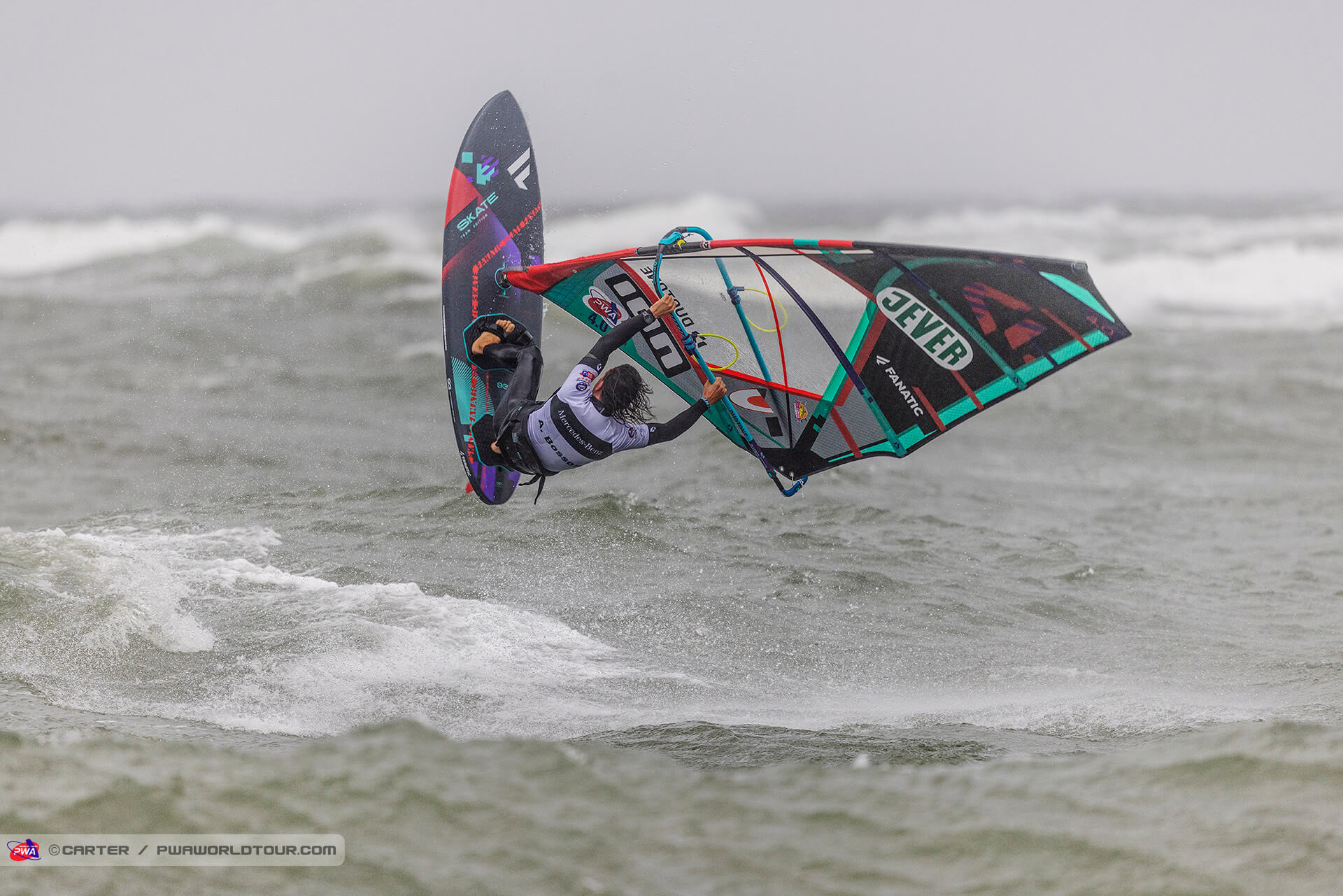 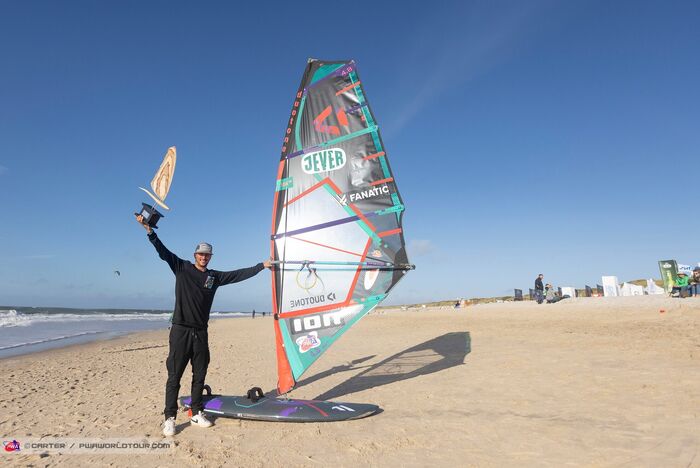 After a 2 year covid-induced break, the windsurfing world descended on Sylt from the 23rd September - 4th October and it would be the only freestlye event on the PWA Calendar this year, meaning it was a winner takes all World Title showdown. In both 2018 and 2021, Adrien Bosson came tantalisingly close to getting his hands on a world title - in 2018 loosing out in the Super Final in Sylt to Gollito Estredo after winning the single elimination.

This year he was focussed, he was hungry for a World Title and it was evident from the minute he stepped on the water in the single elimination. In his first heat he put down the highest heat score of the round to take down fellow Duotone teammate Niclas Nebelung and he was unstoppable from that moment onwards. Even in the final against multiple freestyle World Champion, Steven van Broeckhoven, Bosson won by over 50 points! His weapon of choice? An IDOL LTD 4.4!

In the double elimination it was a waiting game - the single took place on Monday and there was a promising forecast for the following weekend - but in the middle, 4 days in limbo, sitting in the world title position knowing it was all to play for. As the week progressed, the forecast was getting weaker and weaker, but one thing didn't change - no matter the strength, it was going to be bolt on shore, classic Sylt conditions. 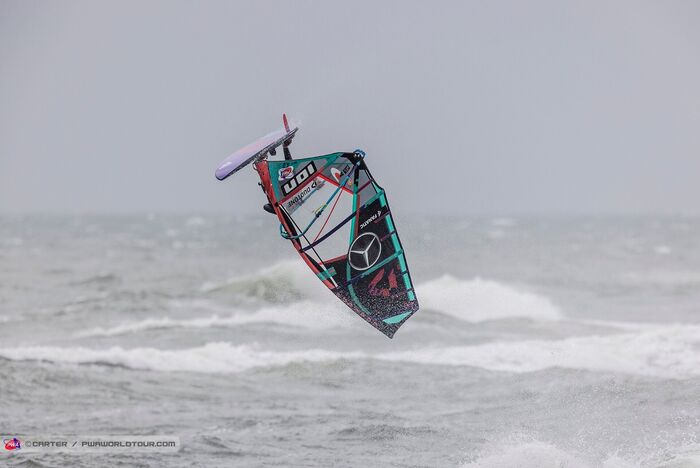 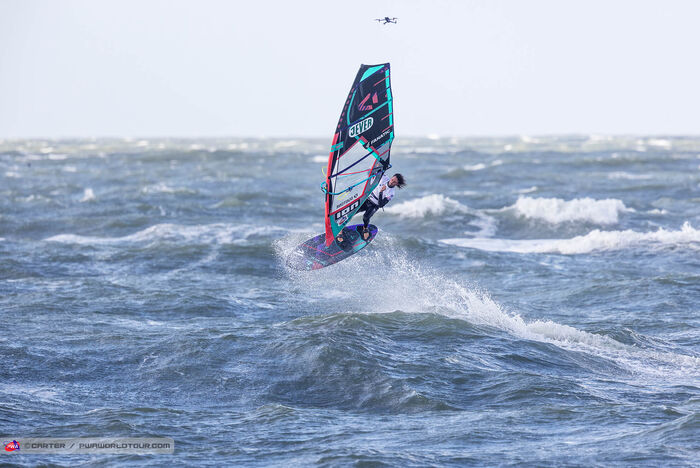 On Saturday the double elimination got underway, finishing at sunset with the final 6 known. 5 other riders who were all equally capable of winning a world title! Bosson waited, and watched. Who would he face for the final showdown? In the end, Jacopo Testa was the challenger. In front of a packed Sylt crowd on a sunny Sunday afternoon - Jacopo was on fire and took the victory in the first final, forcing a super final. Armed with an IDOL LTD 4.8, the lead went back and forth between Adrien and Jacopo throughout the heat - move for move, battle for battle. It was so close in fact that the judge were forced to check all of the scores had been inputted correctly, whilst the riders and spectators waited with baited breath. 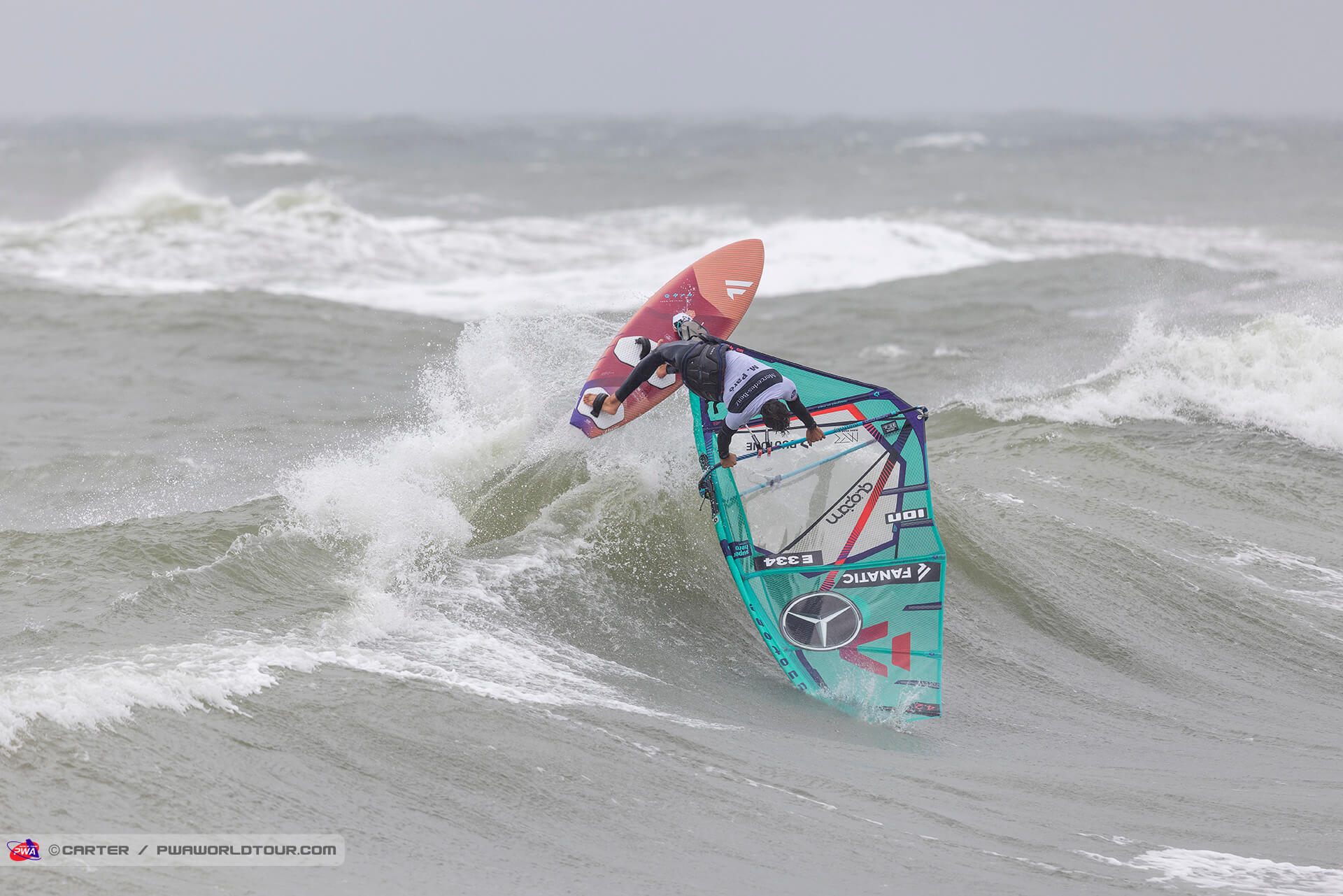 Heading into Sylt, the Wave World Title was all but decided - Marcilio Browne only had to finish 5th (after 2 x 2nds already this year) to take the World title, but the rest of the podium was wide open. Victor Fernández came into Sylt in 3rd place - after a huge comeback in Cabo Verde to finish 7th and a strong 3rd place in Pozo - would he get his 11th podium finish of his career? Meanwhile having missed Cabo Verde due to foot surgery, Marc Paré was outstanding, but unlucky with his seeding, in Pozo. In the single elimination he was taken down in the quarter finals by Koster with a score that would have won any of the other match ups, and it was a similar story in the double. He finished 7th but he knew he was capable of more. 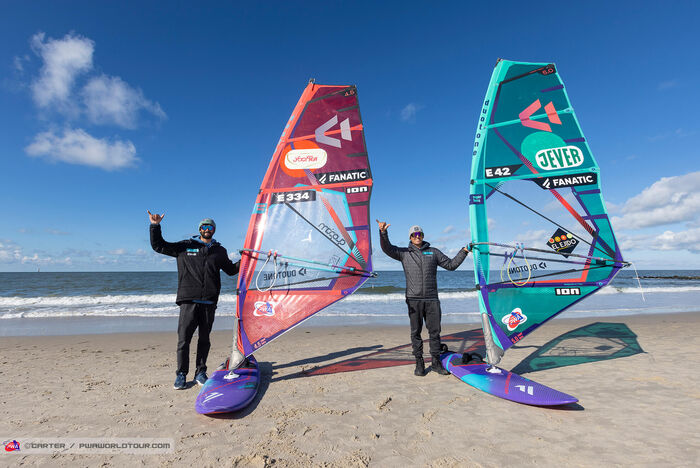 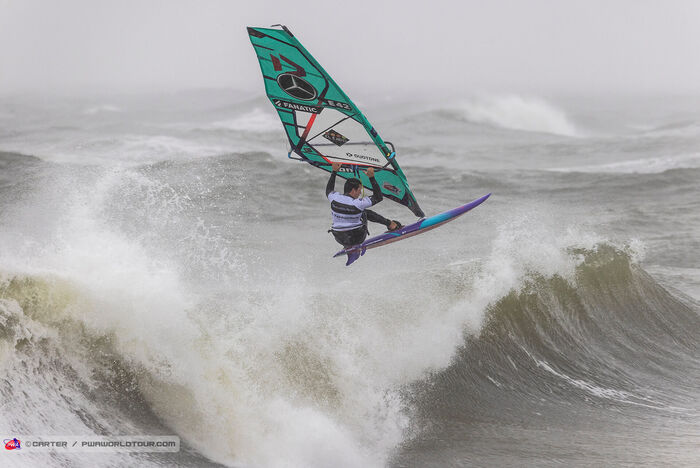 The stage was set for MEGA MONDAY! Sideshore wind and mast high sets - it was probably the best Sylt ever gets and the action was insane! Marc Paré came flying out the blocks in the first round, using aSUPER_HERO 4.2 and it was clear from the minute he set foot on the water, the man meant business. Throwing down huge 360s, double forwards and massive one hand, one footed backloops - he looked almost unstoppable. On the other side of the draw was The Clinician - Victor Fernández, also riding a SUPER_HERO 4.2. One of the most experienced and highly decorated riders in the fleet, he dismissing his oponents with style and technique, maximising every score possible.

Fighting for the 2nd place on the overall podium, the semifinal between Koster and Fernández was to be the deciding heat with Koster just edging Fernández to take the heat win and the 2nd place on the podium. On the other side of the draw it was Marc Paré vs the newly crowned World Champion Marcilio Browne - who would take the spot in the final and a guaranteed podium finish? The rookie vs the master... It was Marc Paré who took the win with a monumental 360 scoring him 9.38 out of a possible 10 - a wave score that no one else came near that day! In the final it was a hunt for waves and despite a valiant effort, Paré just couldn't find the bowl he was looking for to emulate the moves of the heat before. Despite not being able to take down Koster, Paré showed he is a name of the future and a force to be reckoned with. The result also flung him up the rankings to 7th - his best finish yet despite not even competing in one event! 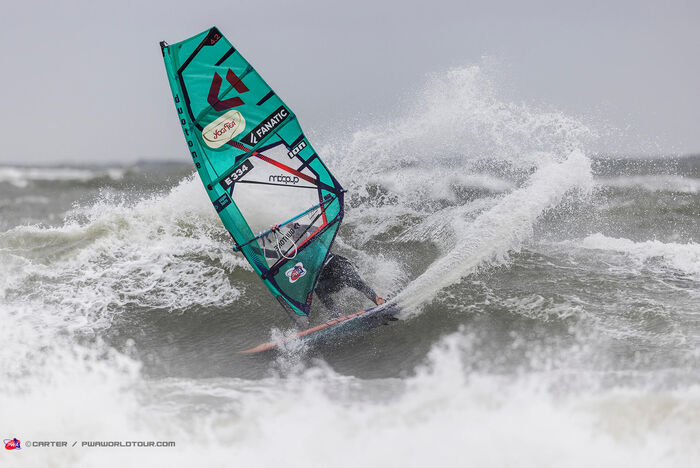 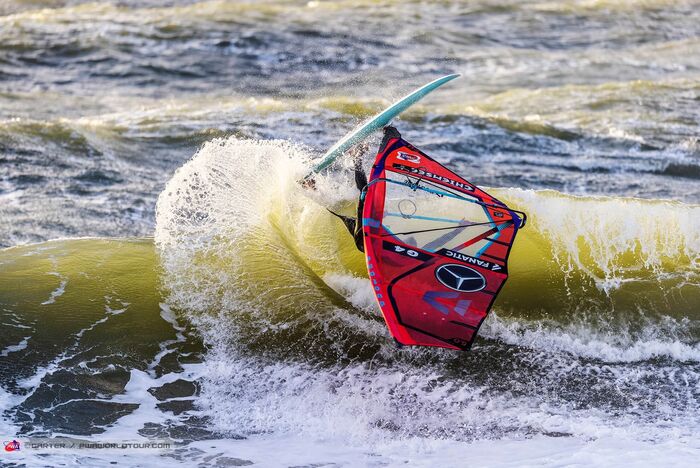 For Klaas Voget, it wasn't quite the fairytale ending to his incredible wave career as the lack of double elimination didn't give him the chance to fight higher in the rankings, but it was still a wonderful send off in front a home crowd and another top 10 finish to add to the roster. After an impressive 22 years of professional windsurfing, including winning the PWA in Sylt in 2005, Klaas has decided to turn his attention to his family and his new love of wing foiling. But don't worry, he's not going far, in fact he's just down the corridor here in the Boards and More office in Munich where he is now working in the Foilwing department. 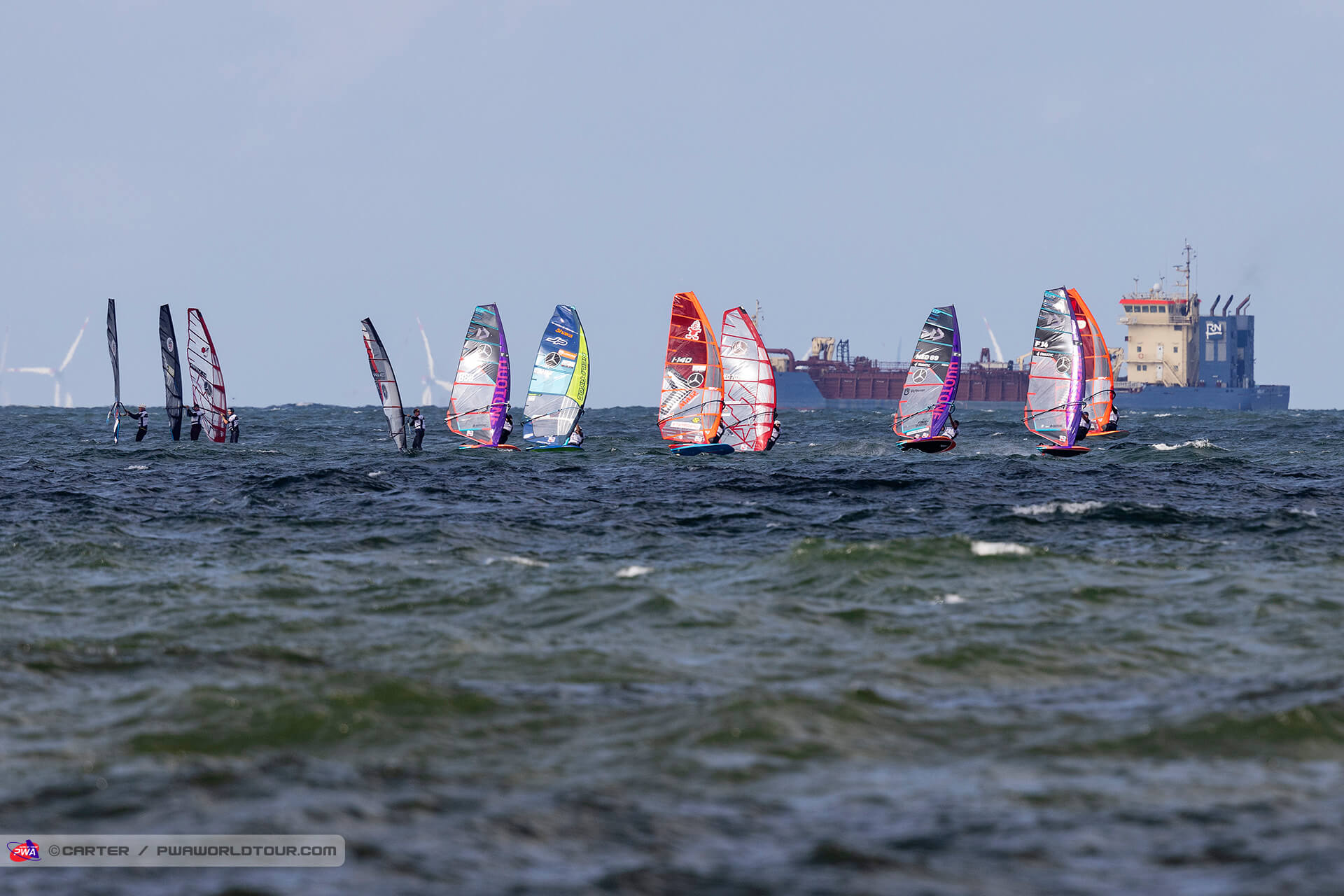 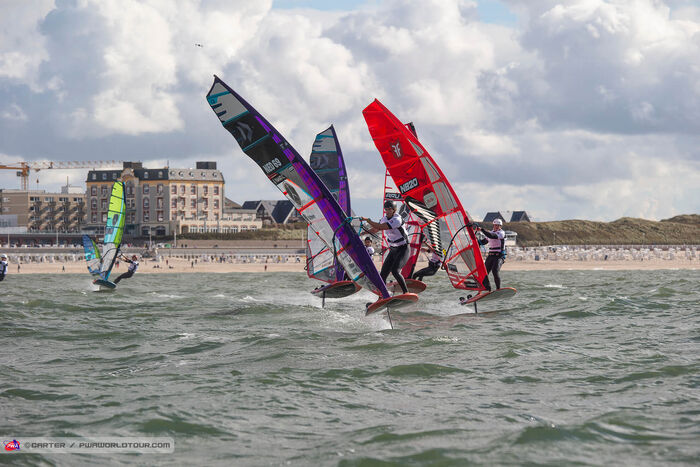 The slalom was another incredibly close fought battle with Pierre Mortefon taking the opening bullet of the week with the WARP_FOIL 8.9, in what turned out to be an epic battle across 10 rounds, with everything coming down to the final elimination which completely turned the results on their heads. With only 32 competitors, the racing was closer than ever with no easy rounds and a small mistake in the first round would prove incredibly costly. Unfortunately for Slalom Fin World Champion, Jordy Vonk, he found this out pretty quickly with a first round exist in the first elimination.

Jordy came back stronger but for both him and Pierre, they were both on the wrong end of a couple of photo finishes which could have gone either way. In the end, Pierre finished 4th after being pipped on the line by teammate William Huppert in the semifinal of the final elimination which unfortunately knocked him off the podium, whilst Jordy Vonk finished 10th. 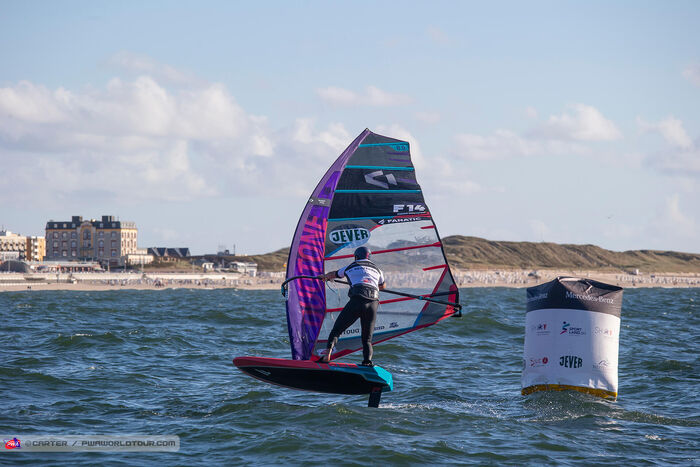