Welcome to the rider review of the NEO SLS. Today we are chatting with international team rider PATRI MCLAUGHLIN from Maui in Hawaii. 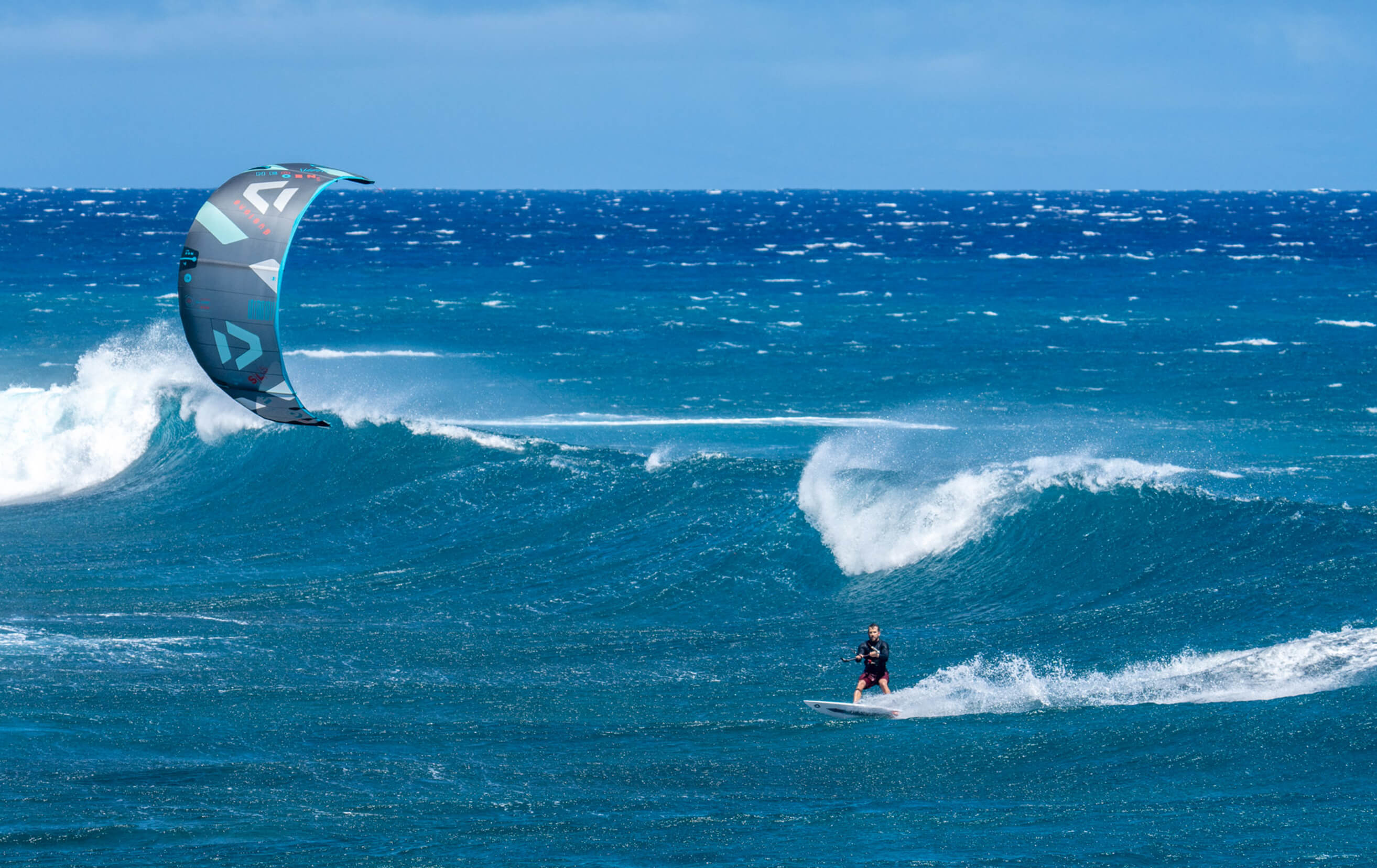 Welcome Patri, you worked a lot on the development of the new 2022 Neo SLS kite alongside designer Ken Winner and Sky Solbach. Give us your impressions on the new kite, how was the feedback from the 2021 Neo SLS and what aspects were you guys trying to improve for this year?

With the 2022 Neo SLS, we have tried to make some adjustments to make the kite better. It's been a challenging prospect as the 2021 Neo SLS was already such a good kite. We wanted to tweak certain things, for example, making it a little bit smoother in the turns and smoothing out the wingtips. There were certain things they were trying to achieve without sacrificing any of the performance. We did a bunch of testing and the result is the 2022 Neo SLS is a better kite without losing any of the bar feel or the super-fast turning. One of the things I love about the Neo SLS is how quick the kite turns when you're sheeted out and de-powered which is really important when you are riding waves. If you're behind the wave and you want to whip your kite really quick without getting yanked or pulled your kite has to be able to pivot and manoeuvre really fast while you are sheeted out and de-powered. That's one thing we focused on a lot with the 2022 model, it's very similar to 2021, just a little bit smoother with more depower and a little bit quicker. Ken has kind of just polished the model up. 2021 was the first year of the SLS Neo and it was already amazing, the feedback was amazing and I think it's the best kite I had ever ridden. I have a hard time riding anything else now.

Let's talk about the wind range, with the SLS series of kites having a lighter and rigid frame, what extra gains do you get when compared to the classic design?

The Neo SLS is lighter, so I feel like it handles a lot better in lighter wind. You get more of a usable wind range with it also. The fact that it is lighter and more rigid allows it to move faster and respond better, especially in lighter wind. The rigid frame also helps when it is super windy, your kite doesn't distort as much when you are sheeting out, it can handle the power and still de-power really well. You can get more range out of one size and more low-end power especially so you can ride a smaller kite. I generally ride a size bigger than a traditional Neo as I can get more depower from the Neo SLS and you can get more power if you want.

Do you have a favourite size or one that is the magic kite for you?

On Maui, it is really windy so I find myself mostly riding a 7 meter quite a lot of the time, but we worked together on all of the sizes. I think the 8 m has come a long way. The previous Neo I didn't like the 8 so much as I felt it had a lot of power and a lot of pull, so it was harder to de-power. I find myself now riding the 8 m a lot, it has really come a long way even in the classic model, it's really good. The 9-12 sizes turn so much faster than last years kites and they are so light they perform really well in light wind and the drift has also improved, it’s so good, it's actually hard to get the kite to fall out of the sky. I find myself mostly riding the seven or eight as that's the most common conditions for here but when the waves are glassy and the wind is light I'm quite often on an 11 meter.

The SLS kites are billed to be high-performance kites and experienced riders can extract that extra performance, but with the things like added wind range and more responsiveness would these kites be a great choice for every level of rider?

I think the Neo SLS is a great kite for everybody. Definitely good for intermediate and higher-level riders as they will appreciate the fast turning speeds, the de-power and the stability of the kite. For beginners, it might be a little tougher as the kite is so fast and responsive, especially in the smaller sizes. What I have noticed when teaching before, having kites that turn super quickly and we're almost twitchy could be detrimental to the learning progression as your movements are so responsive to the kite. You hardly need to pull in one direction and the kite will fly the opposite way. Sometimes having a more stable and consistent pull is easier for learning how to kite. I would say for lower than intermediate the Neo is still an awesome kite to help you in your progression. For intermediate, to advanced riders, the Neo SLS is definitely the kite to get. It's the kite I ride all the time, I love it. 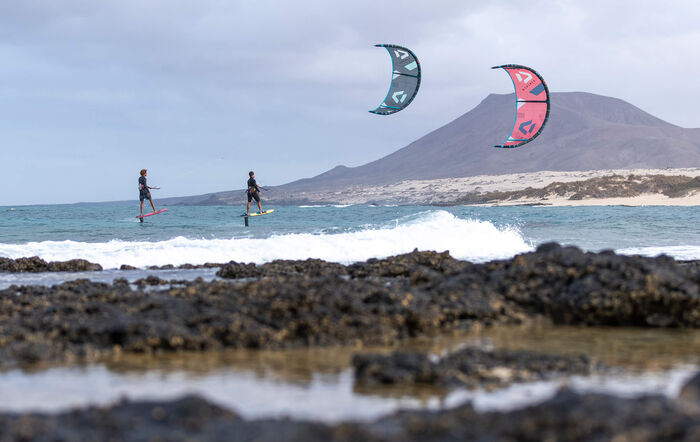 Let's talk a little bit about setup options, what options are there on the Neo SLS and tell us what air pressures you use.

As far as air pressures go, the recommended pressure of the kite is 7 PSI. That's partially so it doesn't put unnecessary strain on the kite, also if you crash your kite hard it's more likely to absorb the shock. I personally pump my kites really hard, having a really hard leaving edge on your kite makes it more effective at cutting through the choppy wind and maintaining its shape. But saying that, we do all of our testings at 7 PSI and that's how we ride them during the testing process. If I'm going out for a session for myself in gusty conditions I tend to pump my kite pretty hard. I close off the struts in case I crash and it might deflate, but I leave one open so if I was to crash it, the air pressure can move a little bit using that one strut. I would recommend though to keep it at the recommended 7 PSI for the ultimate longevity of your equipment. As far as other settings, I put my backline adjustment onto the hard setting, I like to have a little bit more direct bar pressure and a little bit harder feel for turning.

Which bar and line setups do you use and do you switch it up depending on the size of the kite?

As far as bar and lines I use the same setup on all of my kites. I use the large click bar and 24-meter lines. A lot of people use 22 m lines and we actually test the kites on these. I prefer the 24 because I feel it gives me a little more time with your kite in the sky if you make mistakes. It gives you a slightly larger wind window, which I feel is slightly more forgiving for wave riding.You are also able to get a little bit more power out of your kite with the longer power stroke with a larger wind window. I've been riding 24 m lines with the large click bar since it came out, it's a super clean setup, no dangling lines hanging off, nothing to tangle anywhere. I also use the rope slider harness line for my harness hook which gives you so much more flexibility in movement which helps when pivoting around and doing turns. 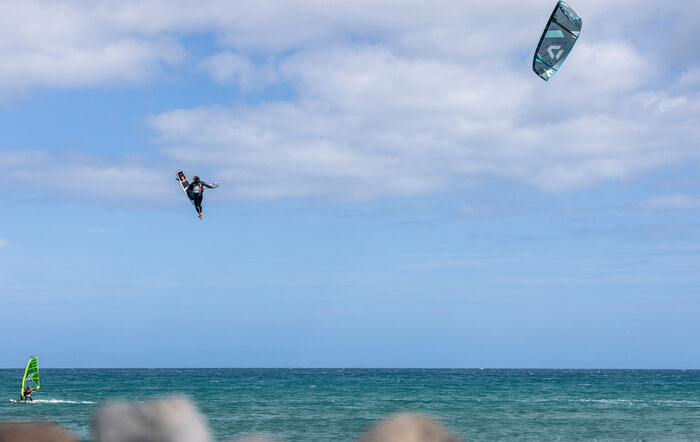