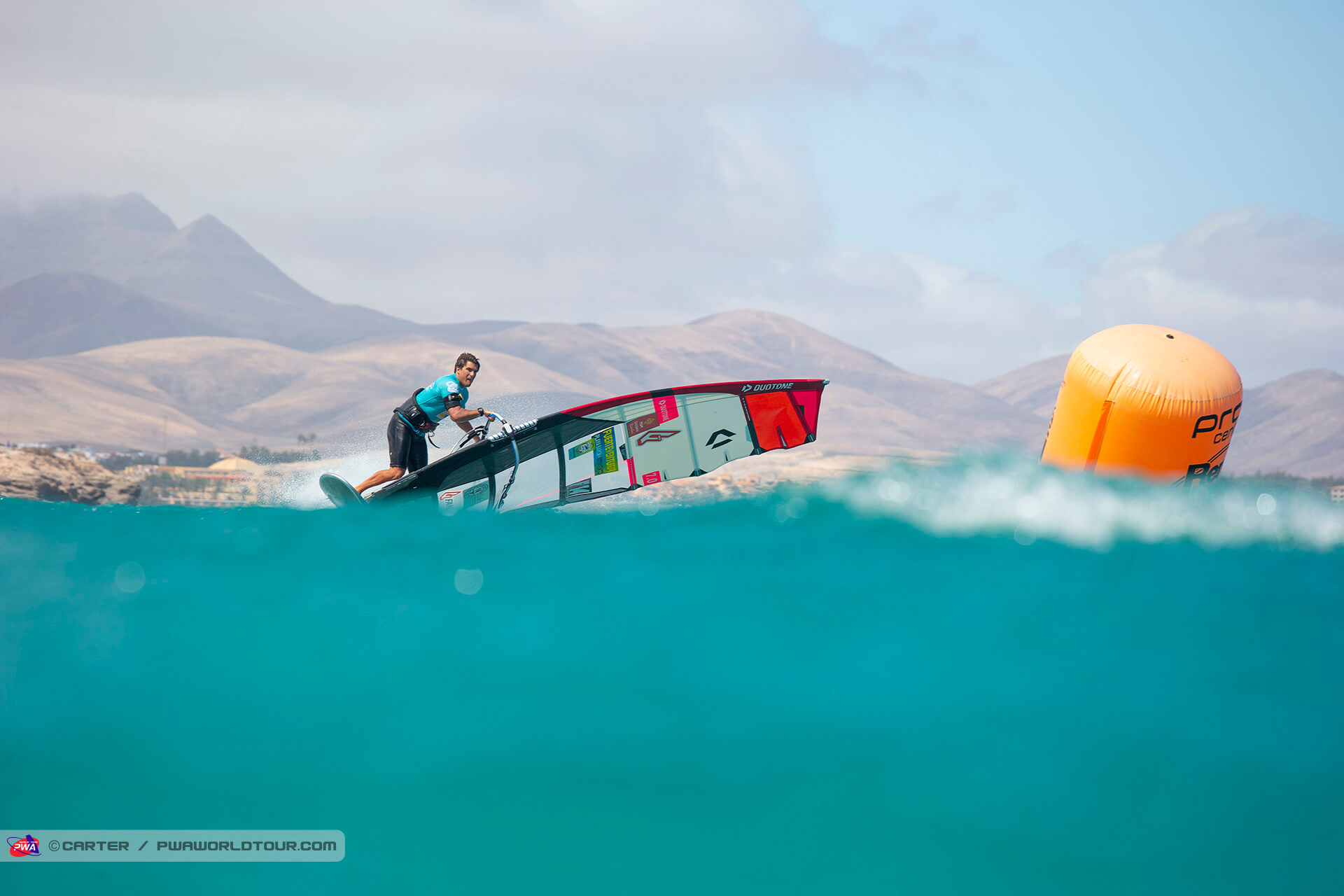 Slalom at its best 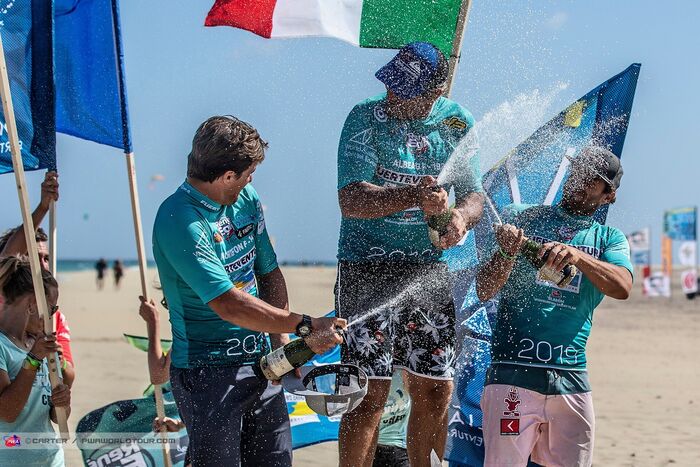 EXCITING until the end

It had to come down to the last day. All of the BIG 3 - namely Albeau, Iachino and Pierre Mortefon, still had chances for the event victory. During the 5 days of racing the event lead changed constantly. Every small mistake meant giving advantage to the others. This is not the way things go usually on Fuerteventura. The last couple of years there was noone out there who would be able to challenge Albeau. 2018 he won each and every elimination.

DAY 3 saw an epic battle between the BIG 3. If you watched PWA live stream with Ben Proffit you might remember him freaking out quite a few times. The conditions were challenging with both ground swell and wind chop making the course become a rocky downhill ride. Together with strong wind, only the best survive. You don't see those boys rigging their 6m sails very often!

Mr. Pierre Consistent Mortefon impressively proved his name right with these results: 3rd, 2nd, 3rd, 1st, 1st, 3rd, 3rd, 3rd, 4th, discarding 3rd and 4th! He must have eaten a fantastic breakfast, as he directly won the first and second elimination of day 3. This secured him the event lead. Later he had to give the event lead back to Albeau, but the second place means stepping up to his favourite third place in the overall ranking.

Pierre Mortefon leapfrogs both Iachino and Albeau into the current No.1 spot after enjoying a superb day, which saw the Frenchman record back-to-back bullets and a third place from the 3 eliminations completed today. Mortefon claimed a clearcut bullet in the opening elimination of the day and then produced a moment of magic at the second gybe of Elimination 5 to dive inside Iachino, before completing a feat which not many sailors manage - especially in Fuerteventura - by overtaking Albeau on the exit to claim a superb victory, which took Mortefon to the top of the event rankings. (PWA)

Young Dutchman Jordy Vonk sailed two winners and three runners up finals. His strong performance in the winners finals (2 x 4th). secured him a 7th place in the event ranking. This means he is still on a second place in the overall ranking.

Elsewhere Marco Lang made it 5 times into the finals (17th). William Hupperthad to withdraw after hitting his shoulder badly by a heavy catapult. We wish him a fast recovery!

The action doesn't stop. After the exciting days of world class slalom, we now head into the spectacular discipline of freestyle. Gollito Estredo, Adrien Bosson and Riccardo Marca spin around on the DUOTONE IDOL LTD. After ending up far from the podium on Bonaire, the current world champion and vice world champion will do everything to take back the crown.

Vrieswijk’s biggest rival in recent years has been 9-time PWA Freestyle World Champion - Jose ‘Gollito Estredo - but the Venezuelan finds himself in the unusual position of coming into Fuerte ranked in a lowly 13th after a shock loss to Julian Mas in Bonaire, which more than likely rules him out of this year’s title race. However, Vrieswijk can expect no favours from Gollito, who will no doubt be looking to return to the top of the podium. The 30-year-old has won here for the last two seasons and could well complete a hat-trick.

Meanwhile, current vice-world champion - Adrien Bosson - will be hoping to return to the podium here. The Frenchman was a little unlucky in Bonaire as he posted one of the highest scoring heats of the contest, but ran into an on fire Vrieswijk. Bosson finished 2nd here last year and has all the latest moves on both tacks and could challenge for the event title again.